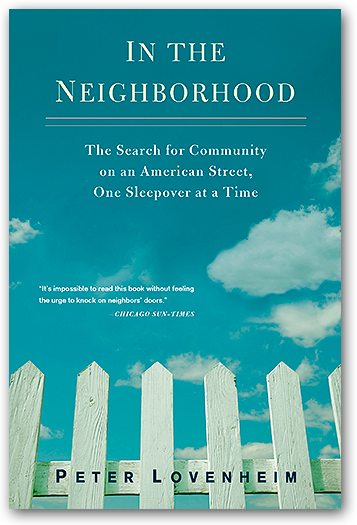 The Search for Community on an American Street, One Sleepover at a Time

Peter Lovenheim had lived on the same street in suburban Rochester, New York much of his life. But it was only after a brutal murder-suicide rocked the neighborhood that he was struck by a fact of modern life in contemporary American communities: No one really knew anyone else.

Thus began Peter’s search to meet and get to know his neighbors. Being inquisitive, he did more than just introduce himself. He asked, ever so politely, if he could sleep over.

With an open mind and a curious spirit, Lovenheim takes us inside the homes, minds, and hearts of his neighbors and asks a thought-provoking question: Do neighborhoods still matter—and is something lost when we live as strangers next door?

—Korean edition by Book21 Publishing Group
—Music: “Love Me Do”
—Five ways to strengthen your neighborhood
—The Value of Neighborhood: interview on NPR’s “The Takeaway”
—In the Neighborhood Photo Gallery
—Reading Group Guide

Praise for In the Neighborhood

“Lovenheim advances ideas about isolation in the modern world, and why a welcoming front porch is needed now more than ever.”
—Booklist

“It’s impossible to read this book without feeling the urge to knock on neighbors’ doors.”
—Chicago Sun-Times

“Using the sleepover as an innovative sociological lens, Lovenheim provides a smart…personal look at what Americans tend to lose by [going] about their lives largely detached from those living around them.”
—Publishers Weekly

“It is hard not to be charmed [and] to read this book and not think of your own neighborhood, your own street.”
—Minneapolis Star Tribune

“…poignant and often hilarious…”
—Christian Century
“I couldn’t put this book down. It’s not only a fascinating sociological take on modern American communities, but a deeply personal story.”
—Booklovers

One of the neighbors I write about in my book, In the Neighborhood, was Dr. Patricia DiNitto. Patti had lived three doors down from me—for more than three years—but I had never met her. When I did, what I learned was that she was a radiologist who not long before had diagnosed her own breast cancer. On top of that, she recently had divorced and was now a single mom with two young girls. Patti was open to letting me interview her, sleep over, and write about her life. Later, as her illness progressed, I tried to organize some of the neighbors to form a supportive community around her.

Eventually, Patti became mostly confined to bed. At that point, I asked a friend, musician and music therapist Phil Marshall, to visit Patti with me. (See below re: music therapy.) Sitting at her bedside with his guitar, Phil played and sang—mostly classic rock, folk songs, and show tunes. I remember, among others, “Over the Rainbow.” But the one I remember most—and which haunts me still—was Phil’s slow, balladic interpretation of the Beatles’ “Love Me Do.” I think it moved me so much because in my many conversations with Patti, she had spoken candidly both of the joy she found in her deep love for her daughters and of her regret at how other relationships had worked out.

At my request, Phil recorded this version of “Love Me Do” so I could post it for others to hear. When you listen, I hope you’ll think, as I do, of my courageous and much-missed neighbor and friend, Patti DiNitto

Here is how the American Cancer Society describes the role of music therapy with cancer patients: “Music therapy is the use of music by health care professionals to promote healing and enhance quality of life for their patients. Music therapy may be used to encourage emotional expression, promote social interaction, relieve symptoms, and for other purposes.

“There is some evidence that, when used with conventional treatment, music therapy can help to reduce pain and relieve chemotherapy-induced nausea and vomiting. It may also relieve stress and provide an overall sense of well-being.” (See here) 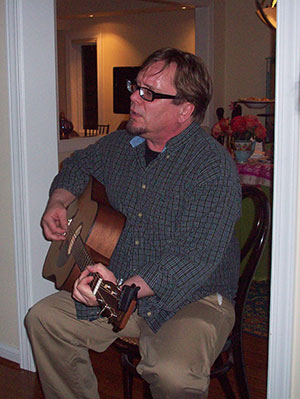 Five Ways To Strengthen Your Neighborhood

Here are five tips condensed from what I’ve learned from successful neighborhoods around the country.

Discussion of the Value of Neighborhoods on "The Takeaway" 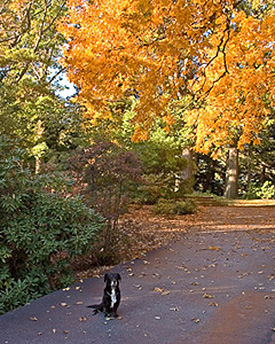 My dog, Champ, who accompanied me on many walks in the neighborhood, is an odd mix of Black Lab and Dachshound. 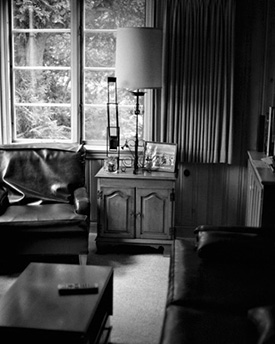 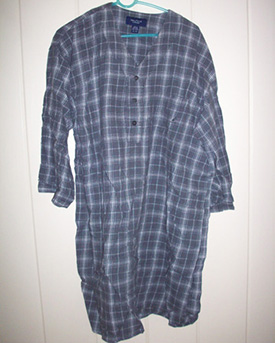 On my first sleepover, my neighbor, Lou Guzzetta, insisted I wear this night shirt. 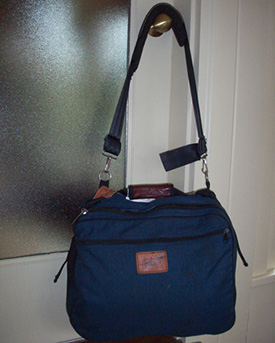 This is the overnight bag I packed and took with me on all my sleepovers. 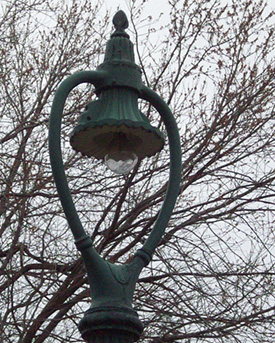 Harp-shaped street lamps help give my street a traditional look, although many of the homes on it, including mine, were not built until the 1950s. 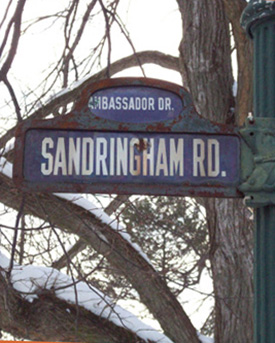 A street sign not far from my own house.

Reading Guide: In the Neighborhood

After his quiet suburban neighborhood is rocked by a brutal murder-suicide, Peter Lovenheim undertakes a somewhat unusual project: He decides to meet his neighbors…by inviting himself to sleep over.

Part memoir, part social experiment, part exploration of a central aspect of modern life, In the Neighborhood brings us inside the homes and everyday lives of several of Lovenheim’s neighbors, and in the process helps us see our own lives in a new light. Lovenheim’s heartfelt quest raises the question: What is lost when we live as strangers to each other, and how can we find a way to reconnect?

The following questions, designed for reader discussion, were composed by editor Mirian Lizzi of Penguin Publishing, who acquired and edited In the Neighborhood.

1. The incident that sparked Lovenheim’s quest to get to know his neighbors was a murder-suicide a few houses away. Could this tragedy have been prevented if the residents on Sandringham Road had known each other more closely? Has there ever been a galvanizing incident of crime in a neighborhood where you have lived? What changes occurred as a result?

2. Some of Lovenheim’s neighbors declined his request for a sleepover. How would you have responded to such a request?

3. Lou Guzzetta is a central figure in the book. What role does he play in Lovenheim’s quest, and how does their friendship affect each of their perspectives?

4. Chapter 4, about Deb and Dave O’Dell, is called “The Top of Their Games.” How do these busy young professionals relate to the neighborhood around them? What does it say about the priorities of modern life that many people don’t feel they have time to meet their neighbors?

5. Patti DiNitto’s battle with cancer becomes an important part of Lovenheim’s experiences on the block. Is her instinct toward privacy typical of how most people react to a life-threatening diagnosis? Would we benefit more from reaching out in times of crisis and need? As concerned neighbors, is there a line of privacy that should not be crossed?

6. Lovenheim spends time getting to know the street’s mail carrier and newspaper delivery man. What do their perspectives add to the book? Can you surmise how the delivery people in your own neighborhood would describe the prevailing attitudes there?

7. Grace Field, known in the neighborhood only as The Walker, does not live on Sandringham. How is her view of the block different from that of its residents? Do you find it surprising that she does not wish she lived there, despite admiring its beautiful homes nearly every day for more than forty years?

8. Sandringham Road is part of an affluent neighborhood, with large homes occupied mostly by medical professionals who work at nearby hospitals. Does socio-economic status play a role in the lack of neighborliness there? Are the same issues relevant in more modest communities or urban areas?

9. Lovenheim grew up on Sandringham Road in the same house he now lives in as an adult. How does this perspective shape his sleepover project? Does his nearly lifelong connection to the block, along with memories from decades past, enhance or distance him from his neighbors today?

10. Childhood sleepovers were one of Lovenheim’s inspirations for requesting to sleep over at his neighbors’ houses, particularly waking up and having breakfast with his friends’ parents in their intimate, everyday setting. Do you have fond (or not-so-fond) memories of glimpsing the daily routines of friends’ families during sleepovers? Do these early experiences give kids a valuable perspective of life outside the cocoon of their own home lives?

11. In Chapter 5, Jamie Columbus describes the layout of a typical “tribal neighborhood,” with individual homes arranged around a shared central space. Similarly, in Chapter 3, Grace Field bemoans the absence of front porches on Sandringham Road. How does shared open space—or a lack thereof—affect a community? Does your own neighborhood feature shared outdoor space, front porches, or other areas where residents spend time together?

12. In Chapter 8, Bill Fricke observes, “Without a dog, you could live next to someone for years and never know who they are.” How do the dogs of Sandringham Road (including Lovenheim’s dog, Champ, and Lou’s schnauzer, Heidi) affect the relationships on the block? Do dogs play a socializing role where you live?

13. What does Lovenheim ultimately conclude after completing his neighborhood experiment? Do you find his conclusions satisfying? Do you think he made a difference?

14. In the book’s final chapter, Lovenheim describes being able to “read” the lights in many of his neighbors’ homes as he strolls down the street one evening. Is this type of knowledge a benefit to the community, or does it cross the line of personal boundaries? Which type of block would you rather live on—one that fosters this type of knowledge or one that doesn’t?

15. The book’s epilogue describes community-building efforts in various cities and towns across the country. Have you participated in any such efforts? Do they strike you as worthwhile? 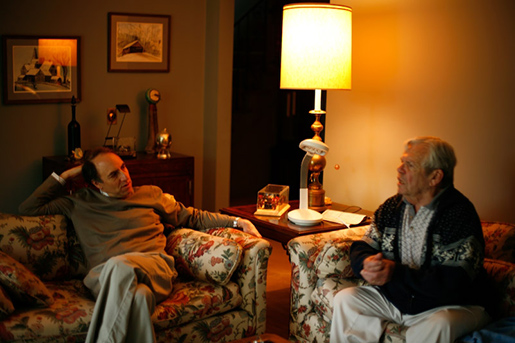 One of my many conversations with Lou Guzzetta
(photo credit: Gean Yip) 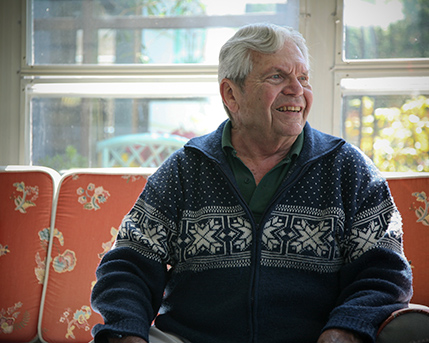